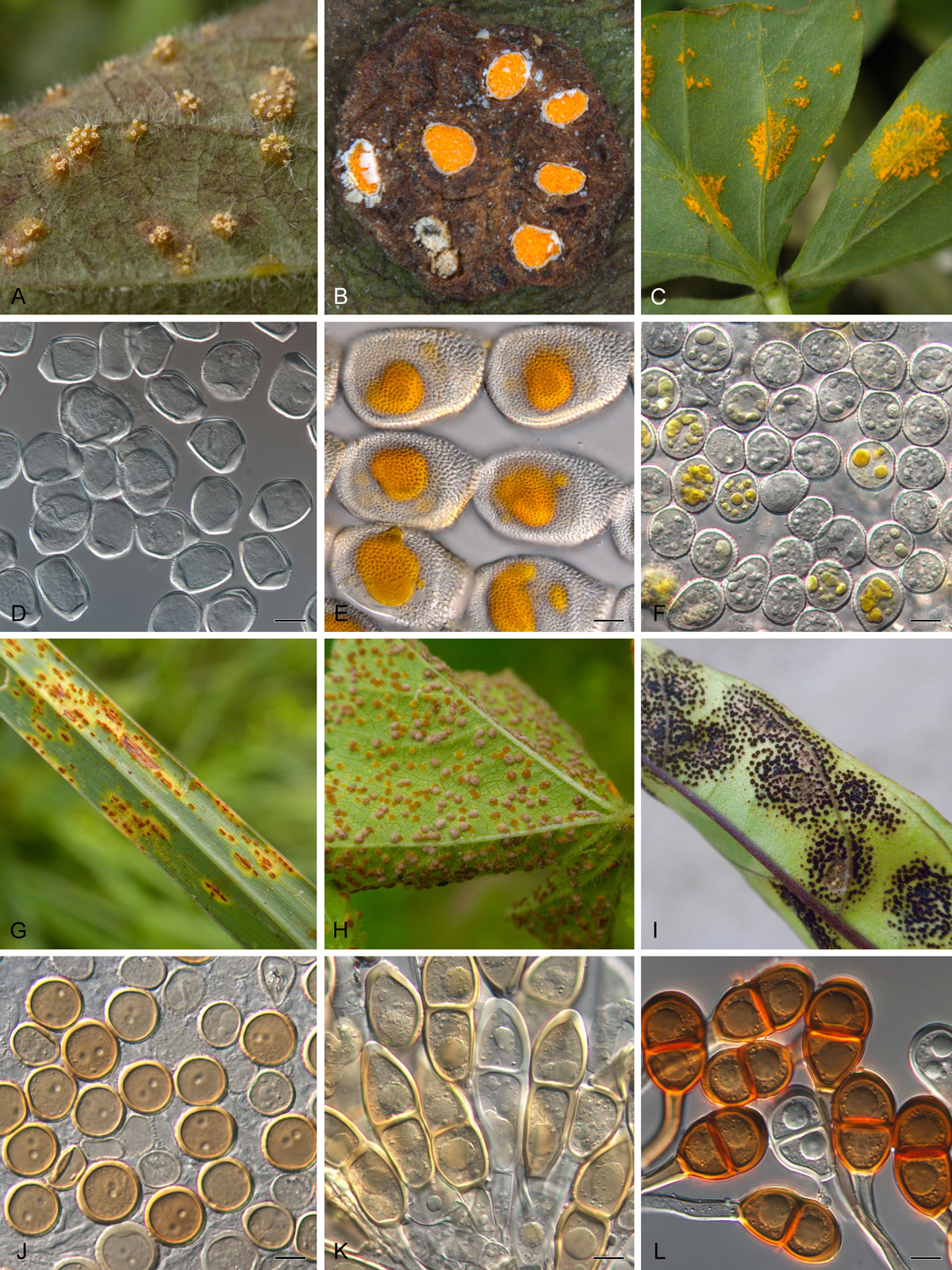 The starting publication for names of all rust fungi for purposes of priority as provided by Art. 13 of the International Code of Nomenclature for algae, fungi, and plants (ICN) (McNeill et al. 2012) is the Synopsis Methodica Fungorum by Persoon (1801), who listed 11 species of Puccinia, 19 species of Aecidium and 30 species of Uredo. The genera Aecidium, Uredo and Puccinia were established for rust fungi with aecia, uredinia and telia, respectively. Many species described in these three different genera are conspecific, e.g. the lectotype of Aecidium berberidis designated by Clements & Shear (1931) is the aecial stage of Pu. graminis. There is little possibility that Aecidium and Uredo (asexual genera) will displace Puccinia (sexual genus) under Art. 57.2 of the ICN (McNeill et al. 2012). Whether Uredo is a synonym of Puccinia depends on the phylogenetic placement of Uromyces beticola, the lectotype of Uredo (Laundon 1970). A taxonomic working group on the Basidiomycota in 2011 recommended the use of Uredo for uredinial species that could not be assigned to a monophyletic sexual genus (available at: http://www.imafungus.org/Issue/31/05.pdf). Many species of Aecidium and Uredo will need to be transferred to Puccinia, or other monophyletic genera, in order to preserve the one name equals one fungus principle (Hawksworth et al. 2011).

There are about 4 000 described species of Puccinia (Kirk et al. 2008), which have mostly been delimited by host taxon. Many of these species have diversified in the last 50 million years as a result of host jumps (McTaggart et al. 2016b), with the aecial host serving as a pathway for further speciation (van der Merwe et al. 2008). The morphology of teliospores and urediniospores is often sufficient to distinguish species of Puccinia that occur on the same host. Molecular approaches have uncovered cryptic diversity in some species of Puccinia (Liu & Hambleton 2013) as well as linked aecia to telia in the life cycle of heteroecious rusts (Jin et al. 2010). Other studies have shown there is less species biodiversity in some rusts than previously thought, e.g. Pu. lagenophorae and closely related species (Scholler et al. 2011, McTaggart et al. 2014). Intraspecific and intra-isolate diversity of the ITS region was found in Pu. horiana and Pu. kuehnii (Virtudazo et al. 2001, Alaei et al. 2009). Multiple haplotypes and paralogous copies of the ITS region within species of rust must be considered for phylogenetic and molecular barcode studies.

Uromyces requires particular consideration as it has long been thought an aseptate variant of Puccinia (Sydow & Sydow 1904, Savile 1978). Morphology alone does not reliably separate Puccinia and Uromyces, because puccinioid (2-celled) and 1-celled spores and characteristics of the pedicel are homoplasious in the Pucciniales (Maier et al. 2007, Minnis et al. 2012, Beenken & Wood 2015). Several studies have shown that Puccinia and Uromyces are polyphyletic, and furthermore that Puccinia is paraphyletic with respect to the type of Uromyces (U. appendiculatus) and other species of Uromyces on Fabaceae (Maier et al. 2007, van der Merwe et al. 2008). Consequently, either a taxonomy that accepts Puccinia as a paraphyletic group is adopted or Uromyces is synonymised with Puccinia. In the latter case, many important species of Uromyces will require name changes. The traditional use of Uromyces for species with aseptate teliospores has been replaced by a phylogenetic approach; for example, Demers et al. (2017) used a phylogenetic approach to describe two species of Puccinia with aseptate teliospores, which would have been described as Uromyces based on morphology.

The future of Puccinia depends on whether it can be divided into monophyletic genera or sub-genera that reflect synapomorphies or ecological relationships on which a natural classification can be based. A broad concept of Puccinia that accepts species with puccinioid spores that are recovered in closely related clades as defined by van der Merwe et al. (2008) and Dixon et al. (2010) is adopted here. Based on this molecular phylogenetic taxonomic concept, we have transferred four species of Uredo from the Australasian region to Puccinia. Further examples of taxa recovered in Puccinia, include Aecidium kalanchoe (Hernádez et al. 2004) and Uredo guerichiani (Maier et al. 2007). We have chosen not to make new combinations of these species without examination of a specimen. Molecular phylogenetic support must be an essential requirement for the description of new species or new combinations in Puccinia because several species known from an anamorphic stage have an affinity with other genera of rust fungi, e.g. Uredo rolliniae (now Phakopsora rolliniae) (Beenken 2014).